Hollie joined her brother Lewis and father John at their fledgling family run microbrewery way back in 2008. She’s helped drive the growth and ambition of the brewery ever since. Hollie loves everything about her job – once the Head Brewer, now, along with Lewis, she manages the whole process of creating our innovative, delicious beers. She’s definitely not afraid of hard graft!

When not at work, Hollie is helping husband Joe run Higher Humber farm, where the brewery is located. They live in the farmhouse with son Harley, daughter Esme and Benji the black Labrador pup.

Hollie on the Red Rock beers: “I love the Honey Slow beer. It’s perfect for a summer BBQ. I do like many of our traditional ales too. I’d usually go for a Lighthouse or Rushy Mede”. 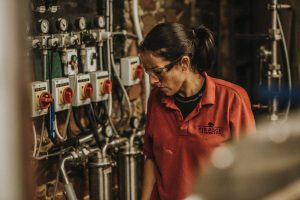