Crafting a better future on a tiny scale 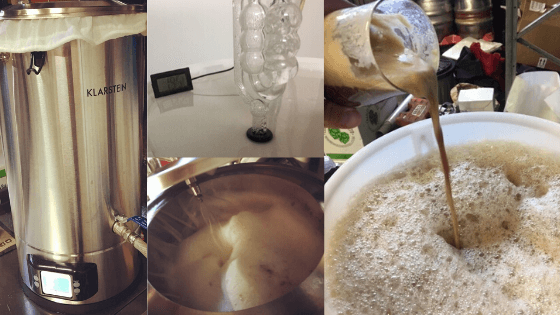 Here at Red Rock, it’s no secret that our brewery ethos is to create the finest hand-made craft beers and real ales we can imagine, in the hope that people enjoy drinking them as much as we like making them. So, it’s a very good job that Director and chief brewer, Lewis Parkes, has a good imagination!

On a worldwide scale, the brewing industry has seen big changes since Red Rock was established some 13 years ago. There’s still a place in the market for traditional cask real ales but what has been evolving in recent years is a demand for innovative, high quality and ethical beers to suit all manner of palates. This, along with increasing sales of small pack (cans and bottles) and keg beers, has provided some fantastic opportunities for smaller, independent breweries, like ours, to change the way we run our business.

It has taken a while for the industry to catch up with how to serve the market with what they expect from an ‘innovative beer’. It is as much about recreating classic beer recipes like traditional English ales, German Weiss biers or Belgian lagers, as it is creating something completely ‘off the wall’ like massively hopped new world IPA’s, beers designed to taste like desserts and beers that mimic nostalgic childhood sweets and soft drinks.  Not forgetting the huge increase in the popularity of Sour beers, from Gose and Siason beers, with their slightly tart notes, to the face puckering sour hit of a traditional Lambic or modern Kettle sour.  With such a vast spectrum of potential flavours, tastes and aromas, modern brewers with a good amount of knowledge, good practice methods and a wild imagination are creating anything they deem possible… or at least willing to try!

From Red Rock’s point of view, 2018 was the year that we decided to grab the bull by the horns.

Director Lewis says ‘Having cut our teeth in the industry by consistently producing good quality traditional cask ales and being one of the first southwest micros to produce a successful lager product, 2018 saw our business really begin to evolve. We have produced a range of new beers on a small scale with a view to increase production and provide seasonal specials that will appeal to new and existing customers. The Jilt tropical IPA was one such beer. The first brew was just one pin but it proved so popular (having sold out in our tap bar in just one night!) that we ended up producing 3 batches throughout the summer, which included a keg product as well!’

More innovative recipes followed on from this success – a Ginger & Rye pale ale, an American Wheat, Coconut Rum Porter and Pina Colada beers, to name but a few. These were brewed using Lewis’s 5 gallon home brew mash kettle and really were tiny batch brews in the truest sense.  Encouragingly for us, they all met with rave reviews and sold out within a couple days of being available in our Tap Bar.

So, with a non-existent rule book when it comes to creating craft beer products, how does a brewer even know where to start?

Lewis explains ‘First we think of the theme and ingredients for the new beer and then with our years of brewing experience, using some of my knowledge as a chef and a bit of wizardry, we create tiny batches in my little mash kettle.’

He adds ‘Creating, producing and tasting these tiny batch beers is the best bit of my job and much like the way we started Red Rock Brewery back in the day. Using my small mash kettle takes that process back to its grass roots and we can easily experiment without the risk of losing large quantities if the worst should happen.  Innovation is key to our survival as a small business. We need to stand out in a very competitive marketplace and we plan to develop more in 2020 and into the foreseeable future. We have some very exciting plans for the brewery going forward which I can’t wait to talk about.’

Our onsite Tap Bar, The Old Workshop, offers a great platform for us to trial our new beers with a captive and diverse audience. Any recipes that particularly stand out can then be introduced as seasonal specials and offered out to our pub traders and independent shops, who are always excited by the prospect of a new beer on their bars and shelves.

These most recent and yet-to-be-named brews, pictured in this blog, should be on the bar around Christmas time.  If you don’t already, be sure to follow our Facebook and Instagram pages for more news and make plans to visit our tap bar and give them a try.